Open Mic at Woodland Park Presbyterian Church (before the concert)

The open mic at WPPC was as in previous times, though this time there were more people. They seem to have started drifting back in now that summer is over (never mind that we’re still having summer weather in Seattle).

One notable performer this time was a singer/songwriter, whose name I forgot, and whose aesthetic derives from John Cage and his ilk, not from folk music. He filled in the spaces in his sparse guitar compositions not with singing or more (faster) guitar riffs, but with perfectly-timed silences. His set ran overtime (he played for nearly 25 minutes when his “slot” was ten) but this expansive music needed a large time-frame. I could have listened longer.

There was also a tap-dancer who positively radiated joy as she gracefully clumped on a resounding wooden plank that she’d brought and set up, and Wayne Lovegrove played a quick guitar “improvisation” that sounded like a finished composition. (I commented to him later that I sometimes compose in a like manner – when one of my “improvisations” starts to be the same every time I play it.) For my part, I tried a version of Roger Woodward’s version of Toru Takemitsu’s “Corona”. Avant-garde fans will recognize this as one of the few mega-hits of the genre (it was, along with Terry Riley’s “In C”, an underground phenomenon in the 1970’s despite the record producers’ usual pathetic lack of interest and promotion). My version, however, fell a little flat – mostly because I couldn’t find a register that was resonant enough for the 3-note idée fixe.

There was also a show of experimental film and music going on at the Good Shepherd Center in Wallingford (a usual venue for experimental performing arts in Seattle), and I decided that I’d at least try to catch a little of it. The two venues are only about five miles apart… As it turns out, I got in on most of the second half (so I missed Dale Speicher's percussion music in the first half).

In the realm of experimental video, I’d been getting ready psychologically for something rather disturbing (as if sometimes the case) – but I wasn’t ready for something as beautiful, contemplative, and relaxing as this. The video, shown on a movie-screen in front of the performance space, was “In a Shifting Landscape” by Megan Berner. Soft, pastel landscapes and seascapes, sometimes seemingly derived from fibrous edges of torn paper, faded in and out of one another or moved imperceptibly across the field of vision. Map symbols sometimes flickered in and out of existence. The piece was set to Nat Evans’ slow, atmospheric music for viola and ‘cello (played from the back of the hall by Heather Bentley and Mary Riles); there was no distinction between melodies and “chords”, and it all moved quietly (in a manner reminiscent of Arvo Pärt) with hints of jazz harmonies and an occasional portamento. The whole experience was meditative, a contemplation on the natural world; of seas and deserts, of mountains, of migrations; and our interaction with nature (and little understanding of it). 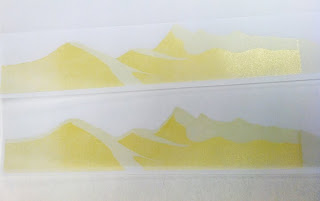 Still from "In a Shifting Landscape", from Megan Berner's website.

The violist and ‘cellist played another of Mr. Evans’ compositions, “Telephone Conversation”, this time from the stage and without the visuals. In style it was much like the previous soundtrack, though obviously a “conversation” between the two instruments; a passage would begin on one and then be taken up and developed by the other; or one would suddenly interrupt the statement being made by the other. This was an amiable conversation, though – no attempts were made to represent any particularly unpleasant emotions, and there were hints of Somei Satoh’s “Birds in Warped Time” (despite its title, one of the most non-antagonistic interactions between violin and piano ever written). 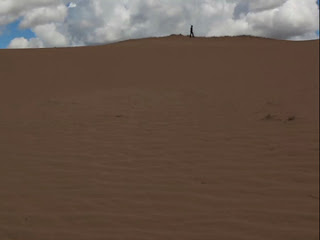 Still from "Sandscape", before the drawing begins; from Erin Elyse Burns' website.


The last piece was another video, “Sandscape” by Erin Elyse Burns. (I don’t know what to make of the fact that both videos had names that contained “scape” and were both done by artists whose last names had something to do, at least phonetically, with burning.) At any rate, most of this consisted of a desert landscape (filmed on a remote sand dune in Eastern Washington State) and a solitary figure “drawing” in the sand with a walking stick. This was all filmed from the side (with an unmoving camera), so it was impossible to see what he or she was drawing – and that seems to be part of the point. It doesn’t seem to be our business what this unknown person was doing, and besides, it was pointless anyway – rapidly shifting qualities of light indicated that the hot sun would soon bleach out anything attempted in this harsh setting; and final shots of sand shifting wavelike down the side of the dune indicated that the solitary person’s “art” would be obliterated by the next wind anyway. The message seemed to be that art was a poignant exercise in futility; the music to accompany this (again by Nat Evans) supported this feeling. Electronic sounds emanated from speakers at the front of the hall; hollow, soulless, like desert winds recorded with a microphone inside a didgeridoo. Percussion and trombone at the back of the hall (played by Ken Pendergrass and Nat Evans himself) took up strange hissing and rattling, environmental sounds… But in the end, this was far from nihilistic. The sheer splendor of the light in the desert, the blue of the sky, the ambience of the sound surrounding the listener in the hall – all of this conspired to create an atmosphere that was strangely celebratory. All art is pointless, it seemed to be saying, but there is beauty everywhere and we might as well add our own little bit while we are here.
Posted by S. E. Scribner at 3:35 PM