I missed the beginning of this concert due to a scheduling conflict. When I got there, about a half-hour after the beginning, Clifford Dunn (who also did a great performance in my “StormSound” concert last year) was playing the flute in an electronic environment created on his laptop.

Electronic “environments” seem to be a promising trend in experimental music and improvisation. I first encountered them on a CD of selected works of Pierre Boulez; there, amid the more-or-less classical ensembles, was a piece (“Dialogue de l'ombre double”) for clarinet and electronic environment. The clarinet part was not improvised, but a complex serialist composition with possible “detours” and alternate versions. The electronic sound “listened in” and reacted according to what the clarinet was doing. Fascinating. I’ve heard another recording of the same piece since then, and it’s as similar as two versions of the same jazz number would be (not as similar as two version of a standard classical piece), but at the same time, it seems completely different… 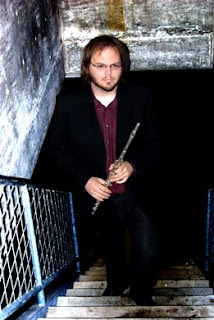 Obviously, such interactive “environments” work well for improvisation. In Mr. Dunn’s piece, the electronics processed the flute and returned it in various guises, some flutelike and some more percussive; some looped and some more linear. There were also prerecorded voices (usually not intelligible) that came and went without rhythm – a possible opposite of hip-hop vocals. Unfortunately I can’t comment more on the piece since I walked in partway through and I don’t really have a sense of how it developed or where it came from.


The next two pieces were by Anne La Berge, a guest flutist from Amsterdam. These were, again, for flute(s) plus interactive electronic environments. The first, for two flutes (Ms. La Berge plus Mr. Dunn) was a fragment of a memoir by Madame Curie, and included dissonances to create a tragic mood amid the sounds of triumph and obsession. As Ms. La Berge commented before playing, “scientists, like artists, are often in love with their work even though it’s killing them…”

“…And now for “Grunt Count”. This is a bit of fancy computer programming by English composer Martin Parker, and it can be very loud. So, if I see any of you with your hands over your ears, I’ll consider it a positive comment.” Ms. La Berge began her second piece, a tour-de-force “solo” that stretched the boundaries between music and noise, delicate beauty and fearsome, overwhelming ugliness. A description of the piece offers an intellectual analysis; however, this does not include the stage presence of Ms. La Berge – her performance was also a dance, using the microphone as an instrument to modify and stretch the sound of the flute. Quick motions brought the flute only millimeters away from the microphone (and the sound was correspondingly earsplitting); at other times she played several feet away from the mic, as if it wasn’t even there; delicate flute stylings amid numberless other sounds. Quite a piece!

The second half of the show was given over to one long improvisation, with both Clifford Dunn and Anne La Berge, and guests Eyvand Kang, violin, Lisa Miller, piano, Tom Baker, guitar and theremin, and Jessika Kenney, voice. This “band” produced one of the most atmospheric, mysterious, and luminous improvisations I’ve heard in a long time. It was difficult to distinguish the instruments (the flutes were, again, processed), as it was difficult to distinguish between dissonances and resolves. The sound was continuous, but created the effect of silence, and, unlike some free improvisations that take more than a half-hour, it did not seem to ramble. The time passed quickly, and the piece ended refreshed. This was a perfect example of how free improvisation should be done.
Posted by S. E. Scribner at 5:58 PM