What can one say about a band that improvises on electrified kalimbas run through all of the effects boxes and “footpedals” that are used for electric guitars? Adjectives fail here – one simply has to experience this experience to experience it… The music, which was not as loud as expected from its amplification, was gorgeous, rhythmic, scintillating, and hypnotic; at times an explosion of simultaneous Afropop dance riffs, at other times an ambient haze (with chord-splitters) reminiscent of Jon Hassel or the musique-concrète of Paul Dresher. Their set lasted for about forty minutes, a continuous kaleidoscopic interlacing of melody, sound, and rhythm. The three of them seemed to have different parts (I don’t know if they’ve worked this out in advance, attempting to set conventions for this completely new type of music, or whether it merely comes from their individual personalities as musicians): Dennis Rea (stage right) used the most effects, including sampling loops and singing into his kalimba; Ffej (center) seemed to provide most of the melodic material, and Frank Junk (stage right) acted as the bass, providing most of the underpinnings. He also hand-built most of the instruments, Ffej later told me. My descriptions fail, however; this was totally unique music, unlike anything I’ve ever heard. I hope it is a new genre that becomes a trend – it is, besides being a cutting-edge experiment, catchy enough to filter into the mainstream. 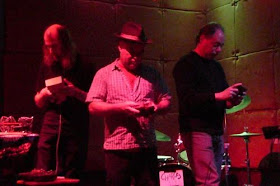 Two brief acts opened the show. Noisepoetnobody improvised on 70’s and 80’s analogue synthesizers, making a sort of retro-psychedelia take on Phill Niblock and other drone music. “The Crutch Guy” played a homemade percussion instrument, a crutch fitted with strings, springs and a pickup – creating crunchy, noisy electroacoustic grooves, some of which (“at the risk of desecrating the Chapel”) had a decidedly hip-hop bent. Fun! I might add that I don’t think the Chapel was desecrated.