There have been some memorable piano concerts at the GSC Performance Space. Dennis Johnson’s “November”, played by R. Andrew Lee, was particularly good, played last year, fittingly, in November. Though entirely different, these enthusiastic and muscular performances by this young pianist from Florida rate as another. 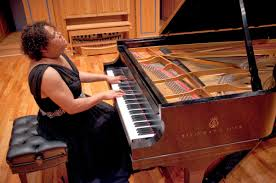 Ms. Baker played nine pieces. For the first, recordings from the Apollo Moon Landings played over loudspeakers while she played fragmentary motives more or less in the style of Schubert, quite loudly. At first I wondered what the connection was (or if there was a connection) between these two sonic worlds. After the piece, she put it more in context with the first of her several stories for the audience. The piano music was called “Fold-Out Franz”, and related to how she’d found a box of Schubert piano music at a flea market (with a fold-out of the composer). The moon landings didn’t relate except that she’d happened to have them playing once when she practiced the piece and they synched up nicely. Fold-Out Franz serendipitously goes to the moon.

The remaining pieces for the first half were “conventional”, without any electronics or prerecorded parts. One of Philip Glass’ “Metamorphoses” was Glass’ usual “fun with arpeggios”, though with a slightly more interesting chord progression than Glass often uses. Ms. Baker played it with quite a lot of rubato, which always strikes me as odd for this kind of rhythmically precise piece (though Glass himself plays his music this way). As is often the case with Glass, though, this was pretty but the least interesting piece of the evening.

Arvo Pärt’s “Partita” shifted the concert into intense high gear. Ms. Baker stated before playing that those used to Pärt’s “tintinabulary” style will be in for a shock – this is nothing like that. An aggressive moto perpetuo begins, with some stutters; then it suddenly collapses into a quiet quasi-fugue. Atonal harmonies and dissonances flicker in and out as the music slowly builds to a climax (of mostly major chords – startling in this context!) and then returns to the beginning. All in all it reminded me more of Bartok or even Ligeti than other Pärt piano pieces I’ve heard.

“The Artist in Turmoil” (written when Ms. Baker was in her early twenties) was an explosion of pianistic passion in the manner of Rachmaninov – though it was cross-cut and fragmentary in a way that made this a wild, dark, angst-y piece.

The first four pieces of the second half were Ms. Baker’s own compositions. Two of these were for piano echoed with electronics into a dreamy, otherworldly ambience. I had expected these to be rather like Somei Satoh’s drone piano pieces (of which “Incarnation” has actually gotten a fair amount of airplay on KING-FM over the past couple of years). I was wrong. The “echoes” did not continue or intensify any piano drones; rather, they sounded quietly, as if from a room down a long hallway. Delicate individual notes seemed to float in the room like stars in the night sky. The first piece, “Homage à Pärt”, sounded more like Pärt than Pärt’s partita did. The second piece was shorter but much in the same vein. These pieces may be a continuation of what Feldman would have done had he gone entirely modal (a direction hinted at in his later pieces). They also reminded me of Dennis Johnson’s “November”, which I mentioned above.

“Magnetic Resonance”, Two pieces for piano and MRI machine, were up next (recordings, obviously, not a real MRI machine.) In the first, an MRI loop produced a “doomp pa-doomp pa-doomp” dotted rhythm on a minor third, over which Ms. Baker had composed fragmentary minimalist and jazzy riffs, with an occasional hint of boogie-woogie. The second was more expansive in mood though shorter: the MRI became sound became a series of drones of various timbres; the piano part seemed to grow out of this in an almost symphonic manner.

The last piece was a set of selections from Hovhaness’ “Visionary Landscapes”. Ms. Baker stated before playing that Hovhaness was one of the first to compose minimalist music; I had never particularly thought of this though a lot of it does seem to be more recent than it actually is. Here, however, the connections to Glass and Pärt were obvious, particularly in the way in which the melodic line is often pared down into nothing more than two or three harmonious tones. The piece stated this at the very beginning; one repeated note gradually unfolded into a pentatonic melody that kept looping but was never the same. Once in a while, deep bass notes resounded like the low gongs in a gamelan. As always, Hovahness’ “tunes” were particularly beautiful.

What to say at the conclusion? Ms. Baker’s compositions continue the classical tradition into the current information-rich generation in the way that they are composed from fragments cut and pasted together (this is not a negative comment) in the way that a hip-hop DJ might combine older popular music into a background texture for a rapper – though in this case, of course, a classical-based composition results. John Zorn has done similar. I’m also reminded of some of the “pseudo-minimalism” by Toshi Ichiyanagi, where various fragments emerge and entangle over a quick, jagged loop consisting of only a few notes. All in all, exciting music.