Well, I thought I'd start this blog with the concert reviews that I mentioned in the last post, but... Here are some CDs that I’ve picked up or heard recently and are worth a second look. Oddly, only one is experimental in any way…


“Triptet is a meeting of minds and spontaneous electrical impulses between Michael Monhart (saxophones and percussion), Tom Baker (guitars and effects), and Greg Campbell (percussion, french horn and cheap electronics.” (From Triptet’s website.)

I’ll give this recording three thumbs way up. This is a “free jazz” (?) combo from Seattle that abandons such conventional jazz ideas such as solos and song format, yet still somehow manages to preserve its jazz roots. For the most part the pieces are nebulous in nature. Drones and slow overtones interweave over rapid, understated drumming. The instruments are often indistinguishable; sax and electric guitar create a sonic haze that pulls their individual timbres into itself rather than revealing them. There are moments when other styles momentarily appear: the piece “Muffle and Hum”, for example, is a slow, atonal blues number. It appears to either be desperately trying to prove that it is the blues, or desperately trying to prove that it is not the blues, and succeeding on both counts. “Echolocation Song” features multi-tracking over metallic percussion (which is actually Tom Baker’s guitar). Always, however, the sonic haze returns to reclaim the music. The overall effect is sublime, ethereal, almost drone minimalism (but with that persistent jazzy drumming as an anchor that wouldn’t appear in true drone music). I recommend this recording for any “free jazz” or improvised music fans; but with one comment. “Free jazz”, with its wild riffs and uncontrolled squeals and honks, has often been compared to musical interpretations of Jackson Pollock paintings. This is different; much more subdued, more intimate. As it comes from Seattle, I would compare it to another Seattle visual artist: Mark Tobey. 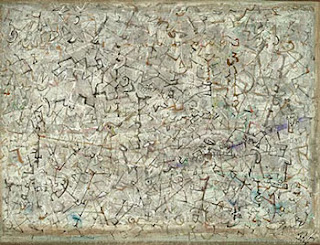 The scattered background of drumming is like Tobey's "white writing" (a graphic technique also used by Morris Graves), and the foreground harmonics and drones are like Tobey's pastel colors – though of course in the music, their roles (foreground and background) are reversed.


I stumbled upon this Japanese court music when I was twelve years old or so, from a scratchy old record in the public library. I found it noisy, excruciating, incomprehensible, and I couldn’t stop listening to it. It seemed such an odd music, preserved (almost unnaturally) from the depths of time; music without a mid range (only piercing high notes and deep bass drums)…

Besides that old record, I’ve heard a few other recordings of it before, and once live at a folk music club (!) in Berkeley, CA – where they made the mistake of amplifying it to rock-n-roll levels (unnecessary, ridiculous, and it utterly destroyed the sound-world of the music). Of those recordings, this one is the most sonorous. There is a bright ambience to this recording and a fair amount of reverberation from the recording space itself, lending a delicate atmosphere to the already otherworldly sound of the music.

There are six pieces, some of which are among the oldest compositions still in use. “Gakkaen”, for example, is mentioned in manuscripts as early as 702 A.D. The first piece, “Entenraku”, is a standard gagaku piece (and probably the one with which anyone familiar with gagaku would be likely to recognize) – it is notable in that it actually gives the musicians a chance to finish tuning up while beginning the piece, before moving into the main section. I’ve also heard this practice in some recordings of Indian ragas – which brings up an odd point: gagaku originated in India, though in its travels through China, Korea, and finally to Japan, it changed beyond recognition. Comparisons with the ancient Chinese and Korean court musics shows this gradual change; to the modern ear, however, there is nothing obviously “Indian” about any of them. (From a musicological perspective there are a few more clues, such as the presence of long rhythmic cycles vaguely akin to Indian talas.)

Origins and theory aside, this is still interesting music; even (despite its completely unfamiliar aesthetic) beautiful. One doesn’t really need to know the theory to appreciate the music.

Radiohead: The King of Limbs


I picked up this one at the public library at the same time as the gagaku. Obviously it’s of a completely different genre…

It is, on the surface level, very typical of Radiohead. These are “rock” songs in name only. Complex layers of electronics form quasi-minimalist sound-spheres over understated bass and drums – the latter in rhythms that are often derived from recorded loops rather than “beats” and thus can’t always be counted evenly. As always, the lyrics can’t be easily heard or understood – this always seems to be on purpose, so that the vocal line is merely another part of the instrumental music (one is reminded of Sigur Ros’ “Parenthesis” and several of Stephan Micus’ works, where there are no actual words in the lyrics).

Careful listening reveals other influences that are starting to appear in Radiohead’s music. Melodically a few of the tunes (particularly “Lotus Flower”) recall the Beatles, though this is not obvious because it sounds completely different. “Codex”, with its slow mysterious keyboard and heavy reverb, could be a lost track by Pink Floyd. The electronica underneath some of the pieces resembles similar music by FourTet; there are even hints of Jon Hassel’s electro-trumpet experimentation – which seems to be gaining more and more cultural significance.

All of that said, this is not a mishmash. Somehow it all comes together like a larger composition in several movements – always a plus for a “pop” album that is basically a collection of unrelated songs. It’s well worth listening to at least once.
Posted by S. E. Scribner at 1:54 PM